Can Rahul Gandhi be compared to Narendra Modi: Surprising Facts 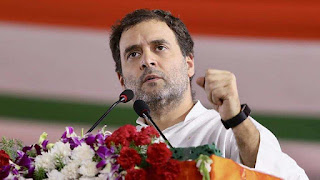 As the election race is gaining its pace, the series of allegation faced by Congress President Rahul Gandhi has increased significantly. One can easily see him getting roasted on social media on fake accusations against him by BJP supporters or presenting him as an ineligible leader on news channels. In reality, these actions are result of BJP strategy to degrade image of Congress President Rahul Gandhi as he serve as a great threat to the victory of BJP in 2019 election. Even after all these criticism, Rahul Gandhi is praised as a beloved leader by majority of Indian population. Get more information about Rahul Gandhi Biography

Recently, a girl from Bangalore has written a letter to Rahul Gandhi asking him whether he can be compared with Narendra Modi. The letter become viral on social media and become a subject of mockery yet Congress President Rahul Gandhi decided to overlook the same and let people have their share of fun. But, even though it is some kind of joke for BJP supporter, is it really possible to compare Rahul Gandhi with Narendra Modi?

Let’s go through some facts to find the answer to this question:

1.    The desire of attention: We have all witnessed that Narendra Modi has travelled around the globe in last four years more than any other politician in history of Indian politics. BJP claimed these long travels as the strategy to strengthen the international relations. Somehow, the party failed to bring any advantage from these so frequent trips. On the other hand, Rahul Gandhi recent speech at Berkeley University in California gains the attention of entire world toward the changing scenario of India and its political architecture.

2.    Working among people: Congress President Rahul Gandhi can definitely not be compared to Narendra Modi when it comes to the welfare of poor people. When Mr Modi was busy in ruining the Indian economy by increasing and adding new taxes just after his dictator act of demonetization, Rahul Gandhi was busy in solving the problems of farmers in by visiting them directly in their farms and homes and taking necessary action to work mfr their welfare.

3.    The blind following: Congress President can’t be compared with Narendra Modi in terms of social media followers. For a nation so obsessed with social media, it is very necessary to maintain your twitter account to increase your fan following. Instead, Rahul Gandhi worked hard to engage India youth in politics which no other leader ever thought about. Under his leadership, the number of youngsters increases from 2 lakh to 25 lakh in IYC and NSUI, the youth wings of Congress party.

4.    Another major difference between Congress President Rahul Gandhi and Narendra Modi is that Rahul is trying hard to unite the people of nation for its better future. He can be seen talking to people from different communal grounds to act in harmony with people from other communities and religions to set foundation to a strong nation. On the contrary, Narendra Modi leadership in Gujarat has resulted in brutal massacre of a lot of innocent people or a particular community in Gujarat riots.

Taking a look at above mentioned facts, it is well established that Congress President Rahul Gandhi can’t be compared with current Prime Minister Narendra Modi. It is like comparing two opposites where Rahul is working hard to recover nation from these troublesome time and Modi is trying his best to just win the 2019 election by any means to exposit the nation for 5 more years.